Fundraising the fun way; with moustaches and hugs. Approximately 1700 Singaporeans danced at the first 10-hour ‘We Will Dance’ marathon organised by National University of Singapore (NUS) students. Held last August, over $36,000 was raised for various charities.

In 2010, two Singaporean youth launched a social movement for giving. Today, the groundswell of approximately 20,000 change heroes has grown beyond Singapore to Thailand, Hong Kong, Indonesia and India.

By Evonne Lyn Lee with additional reporting by Keane D.

nyone can give; be it time, money, talent or resources, to someone who needs it more — and that simple notion is behind GIVE.sg’s concept of giving. Says its co-founder Aseem, “You don’t need to be rich. You need to have a creative idea and be passionate.”

At that time, there were no digital charitable entities to enable donor communities to pledge their support for various social causes via the Internet. According to Aseem, many wanted to help, but didn’t know how to get started. GIVE.sg (www.give.sg) was established to provide a simple, easy and secure way for individuals to raise funds for charities online.

The key was to make giving effortless and convenient to all the parties. Donors decide which charity gets their dollars depending on which social cause resonates with them. Or they sign up as a fundraiser, initiate their own campaigns and launch their personal fundraising webpages on behalf of their chosen charity.

On each webpage, fundraisers explain the motivation behind the campaign; they can also can upload photos and videos to personalise it. The webpage is then forwarded to their network of contacts to appeal for online donations.

Charities can join GIVE.sg for free. Through this portal, over 120 local charity organisations like Action for Aids and The Salvation Army are connected to donor communities.

The key was to make giving effortless and convenient to all the parties.

Doing good ought to be enjoyable according to Aseem, who says, “People tend to come back more often when their giving has been fun! Many channel their passions — dancing, singing, running, etc — to support a good cause.”

Novel forms of giving have seen volunteers shave their heads, hug a stranger along Orchard Road, grow a moustache, dance the night away or sport a new hairstyle.

‘Grow a Mo 2011 — the Mo the Merrier’ got male volunteers to sport and grow a moustache for 30 days in November 2011. The idea tickled Singaporeans and raised $23,635 for the Singhealth Foundation and Singapore Cancer Society.

“People tend to come back more often when their giving has been fun! Many channel their passions — dancing, singing, running, etc — to support a good cause.”

Student volunteers Ingrid, Ying Ying and Suiri brought the LoveDare Campaign 2011 down to shopping hub Orchard Road. They got their fair share of good fun by offering hugs to passersby in return for a dollar donated. The $3,000 collected went to the Home Nursing Foundation and HighPoint Services.

With hardly any cash to fund their ground-up initiative, the founding of the social enterprise was described by Aseem as ‘beginner’s luck and foolish passion’. They knew they had a winning business model, so they pitched their notion of ‘a social movement of giving’ at two international competitions. It paid off. The duo got into the semifinals at Hong Kong PolyU Global Student Challenge and they represented Singapore in the Intel-Berkeley Technology Entrepreneurship Challenge. For both competitions, participants pitched innovation and entrepreneurship ideas to win prize money and awards.

Male or female notwithstanding, sporting a moustache is part of the fun for these participants in “Grow A Mo” campaign.

The seed money — S$65,000 (a S$50,000 grant from SPRING Singapore and S$15,000 prize money pooled from winning different business plan competitions), was used to set up GIVE.sg. At the 2012 President’s Challenge Social Enterprise Award presentation ceremony, the team received a special mention in the youth category.

Last year, The Royal Bank of Scotland (RBS) Singapore partnered with Mercy Relief to provide clean and potable water to affected communities in the Philippines using PedalPure, a manually-powered water filtration system. It raised close to $10,000 for typhoon Haiyan victims. The entire fund-raising process was made easier through GIVE.sg.

Fiona Gibson, Head of Communications and Marketing says, “Our staff and partners — located in multiple locations, across Singapore could opt to donate without any pressure. Closing the donation drive loop was easy; from making appeals to raising the money, and signing off the proceeds to the beneficiary.”

Initially unfamiliar with GIVE.sg, RBS worked on several other smaller campaigns with the portal and after feeling assured of its legitimacy, the bank initiated the Typhoon Haiyan campaign. 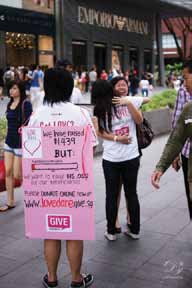 A novel way to spread love and raise funds for charity. Strangers in the shopping belt of Orchard Road were approached by LoveDare student campaigners offering free hugs in aid of Home Nursing Foundation and HighPoint Services.

Since January 2010, GIVE.sg has raised over $2.7 million through 1,513 individual fundraisers initiated by ordinary people.

“It’s great to see new ideas every day,” says Aseem, inspired by the numerous fundraising pages initiated by people passionate about doing good. In 2012, the team launched GIVEasia. org (http://giveasia.org), bringing their flourishing social enterprise concept to Hong Kong, Indonesia, Thailand and India. They hope to see people across Asia support non-profits. Ultimately, the duo’s goal is to “make it possible for thousands of acts of giving to happen everyday”.