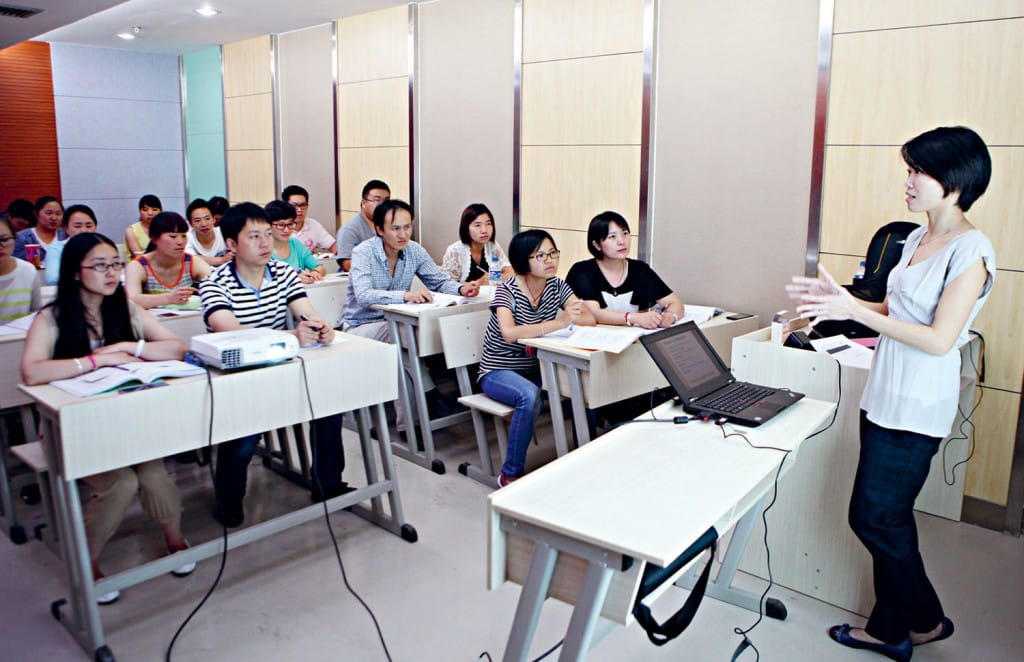 A member of the Singapore team conducting training at the 2nd Affi liated Hospital of Kunming Medical University.

Health-care professionals in Singapore and China are working together to improve the standard of medical services for the elderly in Yunnan province.

Although Dr Tan eventually returned to Singapore in 2011 after 15 years in the province, Dr Loh, who has been there since 2008, carries on his good work, and currently works at Kunming Medical University.

Building on the strength of those ties, the Singapore International Foundation (SIF) launched a three-year Sino-Singapore collaborative project in the province on May 18. Under the scheme, the Singapore International Volunteer (SIV) team from Singapore’s National University Health System (NUHS) and Saint Luke’s Hospital will work with the 2nd Affiliated Hospital of Kunming Medical University and the Yunnan Health and Development Research Association to improve health-care services for the aged by sharing skills, knowledge and resources. The project will focus on two important areas – rehabilitation and chronic disease control.

Deng Dan Qi, Deputy Director of the 2nd Affiliated Hospital of Kunming Medical University, said: “With the strong support of the Yunnan Provincial Health and Family Planning Committee, the hospital believes this training programme will enhance the quality of primary health-care services for Yunnan’s elderly patients.”


CHINA IS RAPIDLY GETTING OLDER

(SOURCE: WORLD POPULATION PROSPECTS: THE 2012 REVISION, POPULATION DIVISION OF THE DEPARTMENT OF ECONOMIC AND SOCIAL AFFAIRS OF THE UNITED NATIONS SECRETARIAT.)

The Yunnan experience will also be highly relevant to the Singapore team as the focus on rehabilitative medicine can help close the gaps in knowledge and execution when it comes to treating Singapore’s own elderly. Both Singapore and Yunnan are facing the same demographic challenge of an ageing population.

An opening symposium in Kunming was followed by three days of training at the 2nd Affiliated Hospital of Kunming Medical University from May 19 to 21.

The training was the first of nine sessions to be carried out over three years by the multidisciplinary SIV team, comprising medical and nursing directors, doctors, nurses, physiotherapists and occupational therapists.

The partnership will result in 120 health-care professionals, from 37 hospitals in Yunnan’s capital city Kunming and its surrounding prefectures, being trained in eldercare across various disciplines. The three-year project will result in 120 health-care professionals from 37 hospitals in Kunming and its surrounding prefectures trained in elderly care across various disciplines.

This group of master trainers, including doctors, nurses and physiotherapists, will in turn pass on what they have learnt to their peers and colleagues. Over time, this will raise the overall quality of health-care services for the elderly in Yunnan as the knowledge is filtered down to the community level.

The curriculum was developed from two feasibility studies conducted last year, and will cover the areas of traumatic brain injury, stroke, geriatric rehabilitation and spinal cord injury. The programme will be imparted through a mix of case studies, roleplaying and discussions.

Following the successful launch of the project, SIV team leader Associate Professor Goh Lee Gan, who is also a Senior Consultant at NUHS’ Division of Family Medicine, credited rehabilitative medicine champion Professor Ao Lijuan from Kunming Medical University for the support they received on the ground.

Prof Goh pointed out that the excellent liaison and translation of the material and case studies by Prof Ao and her team was critical to the smooth execution of the training. Dr Loh’s involvement was also vital, as well as that of the team from Saint Luke’s Hospital.

Said Prof Goh: “Dr Loh was invaluable in connecting the two cultures of Singapore and China, especially in the usage of language and professional practice. There are a lot of opportunities for learning through teaching and sharing across the two cultures. We learn as much as we teach. The friendship created across the two countries will also be important and everyone will benefit from this project.”

Calling the first training session “a very significant and enriching experience”, SIV team member Dr Effie Chew, a Senior Consultant in Rehabilitation Medicine and Head of Division of Rehabilitation Medicine at NUHS, said: “What we can take from our Chinese counterparts is their energy and eagerness to learn and to transform their rehab care system into one that is of an international standard.”

Beyond raising eldercare standards, the health care cooperation between Singapore and China will also have the added effect of strengthening ties between the two countries.

SIF Governor David Chong, who was present at the project’s launch, said: “We hope this and other cooperation efforts by the SIF between Chinese and Singaporeans will foster the strengthening of ties and trust at the people-to-people level.

2015 is also an opportune time for this partnership as it marks the 25th year of diplomatic relations between Singapore and China, celebrating how far we have come in our friendship.”